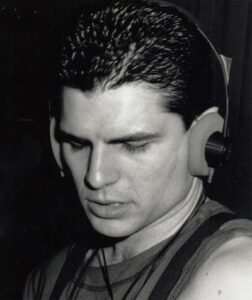 Don’t Let Your Dreams Ever Die

From the age of ten, Aldo Leopardi knew in his soul that he wanted to be a
musician. All it took was seeing AC/DC’s “Jail Break” on the television and he was
hooked. Musically, Aldo’s early influences also included KISS, Led Zeppelin, The
Beatles, David Bowie and Stevie Ray Vaughan, whom he idolized and who served as
an early inspiration to follow the calling of Rock. Raised by his mother in Adelaide,
Australia, learning to play guitar was not going to be easy, but Aldo learned early in life
to never turn away from a difficult task. His mother made him a deal; do all the
research and find a suitable guitar teacher and she would support him. This was the
first step toward the realization of Leopardi’s musical dream and he hasn’t looked back
since.

By his teen years, Aldo was playing gigs in Australia and by his early twenties; he was
self-producing and recording his music. At the same time, Aldo Leopardi was a
successful student in Dental School, yet always appearing on the rebellious side, sitting
in the back of class, sporting a classic black AC/DC muscle T-shirt, crazed hairstyle and
ear-ring. Soon, he was managing a thriving career as a Dentist. Yet, Aldo always had a
plan; quit dentistry, go to Los Angeles and play music. He recognized, however, that
the music industry stacked the odds against the artist. It would be a very difficult
undertaking, but Aldo was not to be deterred. He made himself a personal promise to
increase his odds, financially and creatively, and take control of his musical destiny.
Eventually, Aldo moved to the United States, embarking on a new adventure, the first
phase of his plan. Begrudgingly, that phase required putting his music career on hold
while he worked endless hours to become a leader in his professional career as a
highly specialized dentist (Prosthodontist). While becoming that leader, Aldo never
strayed from his love of music, it was the very passion that fed his soul. The music was
always there and Aldo soon knew it was the time to fulfill that promise.

It took Aldo three years to record his self-titled album (2006 release), with every spare
moment spent in the studio where he wrote, arranged, sang, performed and produced.
His influences ranged from the classics, The Beatles, Led Zeppelin and Van Halen, to
today’s Foo Fighters, Sound Garden, Powderfinger, and Linkin Park. Giving a fresh
edge to the classic, guitar driven rock sound, Aldo instantly appealed to a diverse group
of fans with his live performances too. Using his own highly precise management skills
and unwavering tenacity, Aldo was now doing music on his terms with the start of his
own record label, Backslash Records. Along with producer Mike Vargas and director
Jordan Horowitz (MTV’s Viva La Bam and Newlyweds), he shot the music video for
his song “Always Be”. Aldo Leopardi’s plan had come to fruition. He was living his
dream; recording music, performing elaborate live productions and even creating a high
caliber music video. Simultaneously, Aldo was touring the U.S. as a much sought-after
speaker in field of complex aesthetic and implant Dentistry.

In 2010, Aldo paired up with producer Lee Miles The Red Jumpsuit Apparatus,
Darling Thieves, Puddle of Mudd and Tickle Me Pink among others, in addition to
fronting the band Oh My Stars and Super Naked). The EP Villains and Heroes, Aldo’s
second release, was an innovative mixture of rock/alternative music along with edgy
subject matter, drawn from real life experiences. Other contributions on the disc came
from Tickle Me Pink guitarist Steven Beck, engineer Jason Livermore (from the Blasting
Room studio, he has worked with Rise Against/Gaslight Anthem/Descendents, Tickle
Me Pink among others) and engineer Jason Larson (new Dalton-Hickman Gang album
featuring Johnny Hickman and Jim Dalton).

Aldo and Lee rapidly developed a musical chemistry that drove their collaboration on
material for the EP. Lee penned the track “Not Enough”, inspired by personal
experiences, specifically to highlight Aldo’s vocal talents. Aldo said, “I gravitated
immediately to the message and melody. I felt it was a great fit for my voice and also
what I have personally experienced in my life.” On the track, “Love”, Aldo notes, “Dave
Astaire, a Mate and co-songwriter from Australia, wrote the original. I later re-wrote the
lyrics and changed the arrangement to reflect some of the angst I was feeling,
essentially, why is love so difficult to find and hold onto.” He also wanted to pay
homage to his rock influences, such as AC/DC and the Angels from Australia, by
composing a song with a heavy guitar riff coupled with a catchy chorus. Lee further
enhanced the track with additions to the lyrics and arrangement. “My Parade” was
developed through a great group effort from the boys in Aldo’s live line-up. The core
lyrics were written by Aaron Lane and Aldo, reflecting on the egotism of their youth;
“how we thought we knew so much,” Aldo laughs, “but of course, we knew
shit!” Ultimately, the song is a message of independence from social and religious
dogma. The inspiration behind the two-part “The Villain” and “The Hero” came from
Aldo’s own experiences. It tells the story of a failed relationship, the jaded process one
goes through, and then dealing with the reality and the pain.

March 17, 2016 marked Aldo’s return with his 3rd release, “VICE”. He re-united with
“Villains and Heroes” producer Lee Miles, and co-collaborator Aaron Lane, to w rite and
record this record. This five song EP continues to showcase Aldo’s maturity as a song
writer and singer, with a focus on Adult themes. Aldo explains, “In life, we often tend to
break things down and compartmentalize our experiences into black and white. This
record focuses on the grey of life, both in complex adult relationships and self
awareness.” A diverse range of rock genre sensibilities are exceptionally explored in
this new record. However, the Aldo Leopardi quintessential Rock sound still forms a
foundation for this exciting sonic release.

The first song “Calling”, written by Lee Miles, explores the heart felt anguish of
“reaching out one last time to a lost love”. A song Aldo connected with immediately and
gladly recorded, showcasing his vocal range, emotion and diversity. “Vice”, the title
song on the record is a brutally honest exploration of one of the most taboo and
tumultuous relationships one may find themselves in. This high energy yet dynamic
production packs a punch, a welcomed addition to the Rock genre. “Killing the Game”
explores the quagmire of our modern lives; that of combating the social dogma and
economic challenges we invariably face, all of which eat away at our ability to live for
today. This song reflects Aldo’s attitude to never lose site of making the best of each
moment. The haunting hooks and retro feel are reminiscent of British 80’s icons “The
Cure”, drawing you into it’s hypnotic musical journey. “Breathing” is an exploration of
coming to terms with rejection, from both perspectives in a faded relationship. A
dynamic guitar driven piece, this track showcases Aldo’s guitar and vocal ability. The
final track, “Reminiscing” takes the listener on an engaging, enlightening journey down
memory lane. This acoustic 12-string guitar driven track is the most recent of Aldo’s
writing, exploring tangential, colorful and uplifting rhythm and melody trips. The subject
matter explores what we sometimes find ourselves doing, reminiscing about past
relationships that have touched our lives.

Aldo Leopardi has proven himself a constant professional within his dental career, and
a rising force on the music scene. Time may pass and paths may alter, but Aldo knows
that to succeed in anything, never lose sight of your goals. He is an example to follow
your dreams and share your passions.

We're not around right now. But you can send us an email and we'll get back to you, asap.